By standing still and looking at urban green through a camera lens, the awareness on the beauty of urban green and what benefits us as a person starts.

Een photo of one of the participants who tried to take the perfect shot with his mobile phone.

The photo walk was held on November 3th 2019, with the participants gathering at 8:00 on the square of the Centrum church. After a short introduction about the goal behind the photo walk, two areas, where photography was allowed, were presented.

In addition to mobile phones, drones and camera devices were used to shoot the best pictures

The group had 27 participants in total, of which the submitted photos were 38.

The jury consisted of Hedwig de La Fuente, Vanessa van Hetten and Ed Hoogenboom. They selected the 10 best photos and again the top 3 exceptional photos. Tropenbos Suriname promote the awareness of the Surinamese society about the importance of urban greenery by setting up expositions at different organizations and institutions.

The top 3 photos: "Relaxing in Nature (Tot rust komen in de Natuur)", by Cheryll Tjon-A-Ten, who was chosen as the third best photo. "Cherish Me" by Jimmy Jong A Pin, who was chosen second best and "Tropical Sidewalk", by Dion Howard who came out as the winner of the Groen Paramaribo Photowalk!

The three best photographers were each rewarded with a wood-engraved award. 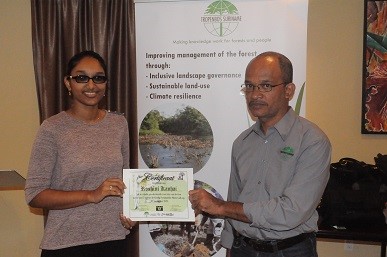 The photographer, Roshini Kanhai, who received her certificate as being selected for one of the ten best photos during the Groen Paramaribo Photowalk. 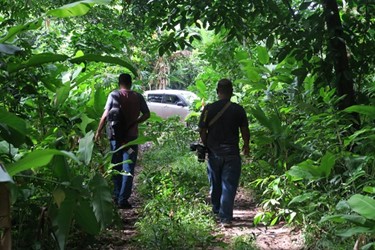 Our biggest thanks go to the Surinamese Photographers Association, SUFOV, for their cooperation, expertise and support that has contributed to the successful photo walk. In addition we thank all the jury members who have also used their expertise for selecting the top photos for further exhibition and giving tips and advice to the participants.

Of course this would not be possible without the participants. We would like to express our sincere thanks to all the participants who were willing to capture the 'greenery' in our inner city!

Every photo’s awarded or not, are of special value to the organization!